I am vaguely acquainted with the work of Harris Wittels, a comedic genius who died of a heroin overdose in 2015. I dabbled in a bit of Parks and Recreation, and I’ve heard (of the) term ‘humblebrag‘, which he coined. Some of my favorite off-colour and silly jokes from TV shows and general pop culture were written by him. One of my favorites: 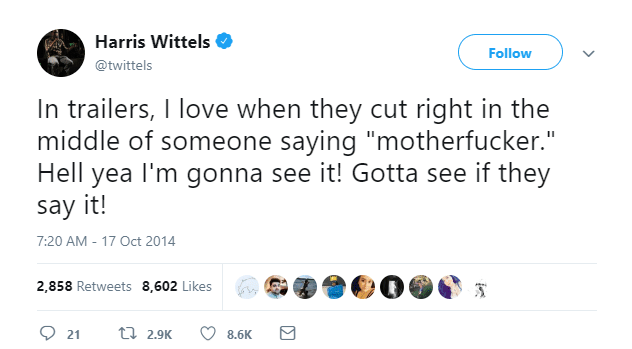 I felt compelled to buy his sister, Stephanie Wittels Wachs’s memoir after listening to her and her mother tell the story of their loss on an episode of the podcast Terrible, Thanks for Asking. It’s raw and real, and had me sobbing and laughing, sometimes at once. So, I bought her audio book.

Audio books are my new favorite thing. In-between momming and working and everything else, I rarely get to settle into a book. I haven’t read a non-electronic book since before my son was born. And so, in an effort to keep as many of my brain cells alive as possible, I listen to audio books. I especially enjoy audio books narrated by the authors. There’s something wonderful about hearing a writer read out the words they have carefully arranged, and bring to life the world they have woven with those words. You can hear the pride, the joy, and also the hard work, and pain that they poured into their book. They also read it just right: they know just which words to emphasize, just when to insert a well-placed sigh or a laugh. You get the idea. I love audio books.

For the last 2 or 3 weeks, I’ve had Wachs as my companion on my daily commute. I have listened to her recount the horror of losing her brother to relentless addiction. She tells the ups and downs, and breathtaking highs and crashing lows of living with and loving an addict. She shares her deep anger at her brother for all of it: the drugs, the death, and the devastation he left in his wake. It is a deep anger born of an even deeper love. It’s the kind of anger you only feel when you helplessly watch the people you love most in the world destroy themselves. It is, in short, a breathtaking account of grief.

Towards the end, Wachs expresses concern that her raw truths laid bare in the book paint an ugly picture of her brother. He was her hero; she does not want to dishonour his memory. Listening to these words, I felt moved to do something I swear I do not usually do: dear reader, I wrote a letter (Facebook message) to the author.

Before you abandon me, and any hope you hold for me, hear me out. Last week was the fifth anniversary of my aunt’s death. She was not an addict and did not die of a heroin overdose but, like Harris Wittels, she lived a good part of her final years in the shadow of a poorly misunderstood and stigmatized disease.  It was at her heels, a persistent darkness that threatened to and then finally did overwhelm her.

After she died, I felt moved to proclaim it from rooftops. I wrote and wrote about what her illness and death meant. Most of this writing was searching. I needed answers to stuff this new, gaping hole in my chest. I needed to understand the pain, even as I tried to numb it. Listening to Wachs’s moving account of her brother’s life and death made me realise that I also wrote because I wanted to draw the portrait of the life my aunt lived even as she ran from the darkness of her illness. In the same way that Wachs periodically expresses awe at her brother’s outsize talents and his incredible achievements, I wanted to show my aunt’s outsize life and her open and full heart, in the face of such darkness and fear. She lived her life. Harris Wittels lived his life.

In the face of demons that would fell even the bravest of us, they lived and loved and made a home in this world. Such that when they left it, they left holes and gaps that will never be filled. I wrote to Stephanie Wittels Wachs (on Facebook – the shame) because I wanted her to know that I understand that, so keenly. I know what it is to lose someone to a scary illness, to have their death overwhelm the details of their life.

Their lives, shaped as they were by illness, were horrible and wonderful, and everything in-between, and they deserve to be seen in all of their glory. And just as Stephanie Wachs did, I write to remember the bravery of that life, lived in the face of, and in bold denial of disease and darkness.